The 2019-2020 edition of the Innovation in Media World Report has been launched today at DIS2019 in Berlin. 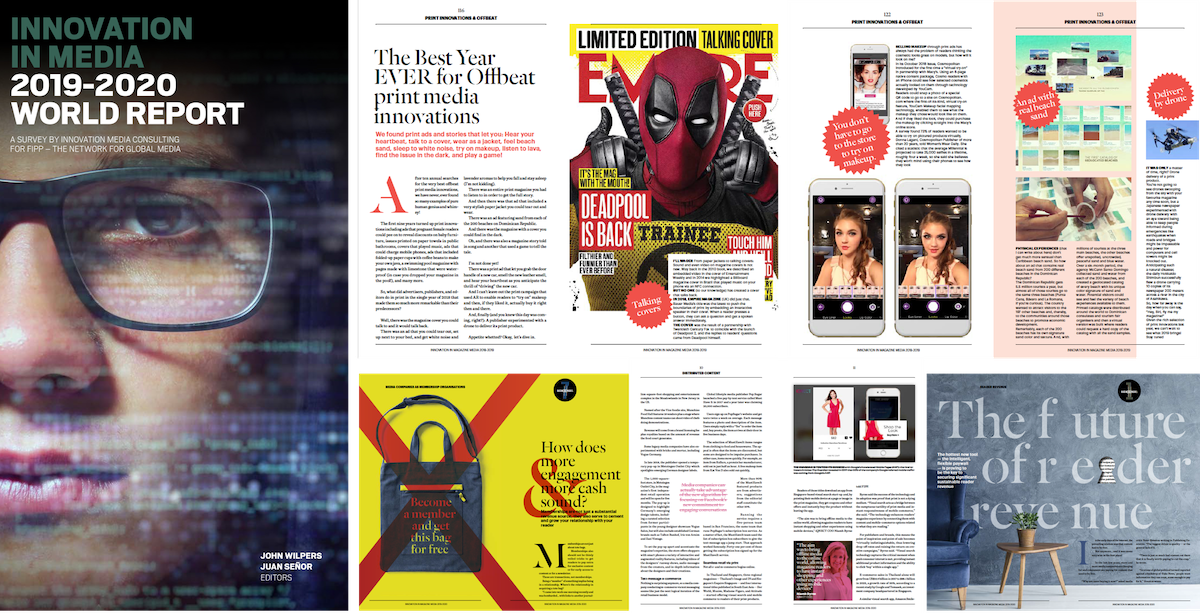 This year, Innovation Media Consulting’s “Innovation in Media World Report” for FIPP delivers perhaps the most important edition in the book’s 10-year history.  For its tenth anniversary edition, the report focuses on what’s been a decade in coming: Successful, proven media business models.

“Ten years ago, when we first published this report, the industry was in crisis with no clear business model to ensure our survival, never mind our growth,” said World Report editor and Innovation Media Consulting president Juan Señor. “Today, through our decades of global consulting and years-long research, we have been able to identify the twelve media business models media companies can use to survive and thrive in the 21st century.

“We focus on business models because they are the sine qua non,” said Señor. “Without successful business models, you can have the greatest journalism in the world, but you’re not going to be in business for long.

“The difference between ten years ago and today is that we KNOW that that there are media business models that work; there is a clear path to media business success,” Señor said.

In working with media companies around the world, Innovation has found that anyone in media these days needs to adopt at least three of these business models. “No one or even two will sustain a media company these days,” said Innovation EMEA director Andrew Rolf, who was part of the Innovation team presenting the book at the DIS conference on March 25 in Berlin. “The mix will be different for every company, and that will be determined by the needs of their audiences and partners or advertisers.

“Some of the models are easier to implement than others, and some are available to only certain types of media companies (think the Philanthropy and Investor models),” Rolf said.

“The answer as to which business model best fits your company can be found by determining the needs of your clients, whether those clients be readers, advertisers, agencies, other media companies (think the IT Provider model), or yourselves (think the Investor model),” he said.

“By adopting business models best suited to meet the needs of your readers and/or clients, you are setting both yourselves and them up for success,” he said.

“Of the twelve media business models, perhaps the most important is reader revenue,” said Wilpers. “You must have high-quality, valuable content readers cannot get anywhere else, and if you have that, we have found that readers are willing to pay for it in a variety of ways, whether it’s a pay wall or events or brand licensing or retail or memberships. All of those things work.”

The book illustrates each business model with case studies so readers can see how companies around the world have implemented the models successfully.

Of the 12 business models Innovation outlines in the new report, there are three that every media company can do, whether they’re big or small: reader revenue, paid content, and events.

“Reader revenue makes a statement: This is valuable content that you should pay for it,” Señor said.

Over the last few years, increasing numbers of media companies have moved to reader revenue models, putting up paywalls for their content — which in turn, is having some eye-popping successes. Take for example, The New Yorker, “where reader revenue now exceeds advertising revenue, 65 per cent to 35 per cent,” according to the report.

Paid content is the second revenue stream that works well for all magazine media because it uses innate media company skills and talent. “We are the storytellers and the trend in advertising is to tell their story, not just to deliver in-your-face sales pitches,” Señor said.

Events are the third business model that every media company can adopt. Magazine media companies are perfectly positioned to be events purveyors. They have the expertise, content, a loyal audience and relationships with sponsors. Events drive revenue through ticket sales and sponsorships.

“Magazine media cover niches for people who care deeply about their passions. For example, say they work all day at something that they don’t particularly like doing, that means their passions become even more important on the weekends,” Wilpers explained. “Offering them an opportunity to spend time at an event learning how to cook, or take part in a CrossFit event, or indulge in a wine festival engenders loyalty and a willingness to pay for the experience. Being able to get together with people who share those similar passions becomes valuable to them.”

The hottest tool magazine media companies ought to look into for 2019 and beyond is the intelligent, flexible paywall. In the case of Swiss publisher Neue Zürcher Zeitung, a personalised paywall based on more than 100 criteria has increased its conversion rate and doubled its reader revenue (as a percentage of total revenue), over the last decade, according to the report.

“That was really impressive,” Señor said. “They can turn it on, turn it off, change the colours, change the headlines. It is amazing that we ever thought a single paywall would work, that all consumers have the same tipping point to subscribe. The idea of a flexible paywall should have been obvious but we didn’t have the technology. Now we do.”

One concern media companies have with the memberships and subscriptions is the question of a saturation point. Are readers reaching a point where they are not going to pay for any more memberships or subscriptions. “I don’t think it’s limitless, but I do think the limit for each individual will be determined by his or her interest in the topic about which you are creating content,” Wilpers said. “You have to make sure that your content is good enough and compelling enough, and the niche is big enough to get enough readers to pay for it. So, you probably wouldn’t want to cover fly fishing in the South Pole.”

Media companies need to make sure the niches they’ve chosen and the content they create pushes their subscriptions and memberships to the top of their audiences’ spending budgets, and doesn’t get cut when times are tight.

Each year, Wilpers scours the internet for quirky, offbeat and innovative magazines, campaigns and advertisements, and every year, he thinks, “I can’t possibly continue to find more crazy innovative stuff, but I always do and this year is no exception.”

This year, Wilpers’ favourite weird and wonderful innovation was a sleep aid in a print ad. “You can plug-in this stand-up ad into your USB and it will emit a lavender scent and white noise,” he said. “The guy who created it had two young children who were not sleeping through the night. But when he used white noise and lavender, they fell asleep, and that provoked his idea for the IKEA ad for bedroom furniture.”

There were other surprising ads and editorial ideas. “There was the cover you could talk to; you could ask it a question and it would respond,” Wilpers said. “There was a paper jacket for men that was part of an ad that was ready-to-wear and scented with Old Spice.”

Weird and wonderful, for sure.

“In our global consulting work, we have found that it’s often a distraction at best, and a time-, staff- and resource-drain at worst with no substantial, sustainable business or editorial outcome,” Señor said. “Too often shiny things are adopted without a viable argument for how they advance either the business side of things or the content side of things in a substantial, ongoing, scalable way. It’s far better to let early adopters and the pioneers play with things and see what they can do for your media business. You should watch your competitors to see what they’re doing so that you don’t fall behind, but hold off on the big expenditures and the big staff diversions, until you can absolutely say, here’s how it’s going to work, here’s how it’s going to either make money or draw paying readers.”

That said, there are four areas of media tech that are useful and successful: voice-enabled devices, artificial intelligence, messaging apps, and augmented reality.

Voice is an area that is already being adopted in significant numbers and building habits with audiences. A healthy number of media companies are finding creative ways to impart information through these devices. With smart speaker adoption growing, voice-enabled devices are one of the biggest potential new media market for media. The hard part, Rolf said, is getting listeners to find your “skill” or channel on one of these devices. “The discoverability problem is very real, but the cost of creating the content is not insurmountable,” he said. “I think voice has potential more perhaps for news and for cooking, for example, where it clearly it has already proven its value.

“People are saying that when they wake up, the first thing they do is not pick up their phones but roll over and say, ‘Hey Siri’, or ‘Hey, Alexa’,” Rolf said. “Voice is already being adopted in a way that makes it something that will be around for a long time and have a big impact.”